Heart of the Brush: The Splendor of East Asian Calligraphy

Its history, techniques, aesthetics, and philosophy—with an in-depth practical guide to understanding and drawing 150 characters

A guide to the history and enjoyment of Chinese and Japanese calligraphy that offers the possibility of appreciating it in a hands-on way—with step-by-step instructions for brushing 150 classic characters.

This book is a comprehensive and accessible introduction to the history and art of calligraphy as it’s been practiced for centuries in China, Japan, and elsewhere in Asia. It works as a guide for the beginner hoping to develop an appreciation for Asian calligraphy, for the person who wants to give calligraphy-creation a try, as well as for the expert or afficionado who just wants to browse through and exult in lovely examples. It covers the history and development of the art, then the author invites the reader to give it a try.

The heart of the book, called “Master Samples and Study,” presents 150 characters–from “action” to “zen”–each in a two-page spread. On each verso page the character is presented in three different styles, each one chosen for its beauty and identified by artist when possible. The character’s meaning, pronunciation (in Chinese, Japanese, Korean, and Vietnamese), etymology, the pictograph from which it evolved, and other notes of interest are included. At the bottom of the page the stroke order is shown: the sequence of brush movements, numbered in their traditional order. On each facing recto page is Kaz’s own interpretation of the character, full page. 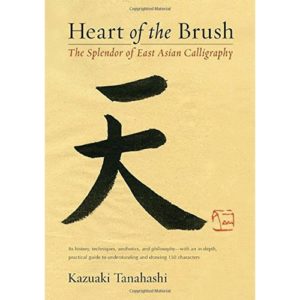