SANGAM: The Jhansi Legacy, captures the struggles of exiled peoples of the Indian subcontinent in the Caribbean known hitherto as “indentured coolies” but who are revealed in the novel as representative classes of Indians of differing socio-economic backgrounds who had created a strong opposition to British rule of the Indian subcontinent. It is a moving story that captures the struggles of these people in the hostile environment of sugar plantations where injustice, lack of decency, and oppression of the worst kind prevailed. At first, there seemed little that could be done to alleviate the plight of the indentured, that were no better off than that of the earlier slaves whom they had replaced as a result of the abolition of slavery. Until the arrival of the protagonists Mataji and her son, Raju, both scions of the legendary rebellious Queen, the Rani of Jhansi, the blight situation of the indentured seemed hopeless. Indeed, Mataji was one of the Rani’s lieutenants during The Indian War of Independence and with her son beside her and their combined commanding presence and ability to win friends as well as get the respect of others, ideas of freedom coalesced to form definite plans to rectify the situation. The first was to take the war that had started in India to the sugar plantocracy in the Caribbean to win back their rights and freedoms. And, by enlisting new-found friends among the French Creoles and sympathetic sugar barons they were quickly able to organize the indentured people into one cohesive community from where they could claim their place in the New World as partners in a multi-ethnic, multi-cultural, multi-religious, and multi-linguistic society, cemented together by the underlying Hindu philosophy known to the world as Vedanta. 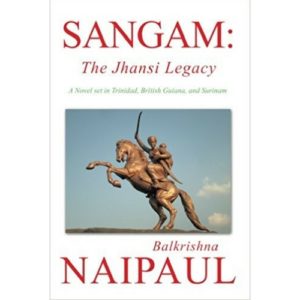