The only way out is within

“Maharshi: Silence is the most potent form of work. However vast and emphatic the sastras may be, they fail in their effect. The Guru is quiet and peace prevails in all. His silence is more vast and more emphatic than all the sastras put together.” —Talks With Sri Ramana Maharshi, 398

JNANI IS A feature-length documentary focussing on the life and teachings of the great Indian sage, Bhagavan Sri Ramana Maharshi (30th December 1879–14th April 1950). Guided by beautiful cinematography and engaging voice-over commentary, the film explores the sage’s legacy, regarded by many to be the greatest spiritual master of modern times.

UPDATE May 2018: The YouTube video clip has now been replaced with the full length documentary film – thanks to the generosity of the film producer CINEFX PRODUCTIONS. To support their efforts, please make a donation on their site

Bhagavan’s teachings, all of which lead to Self-knowledge, are clearly explained by foremost experts and writers on the sage’s philosophy, including David Godman, Michael James and Sri V. Ganesan, Sri Ramana Maharshi’s great-nephew.

Filmed almost entirely on location in Tiruvannamalai, Tamil Nadu, India, Jnani also portrays the wonders of Mount Arunachala, believed by many to be the spiritual centre of the world and widely known as a sacred place of pilgrimage. Indeed, Sri Ramana lived on its various slopes for well over fifty years.

Directed, edited and produced by Jean R. Dedieu, with additional cinematography and co-production by Paula Marvelly, Jnani is a magnificent introduction to the teachings of Non-Dualism or Advaita Vedanta, first consolidated by the Indian philosopher, Adi Shankara, in the early 8th century CE.

Taking his death experience at the age of 16 as its starting point, the film investigates Sri Ramana’s core teachings, which essentially can be distilled into two distinct paths—the path of surrender (bhakti) and the path of Self-enquiry (atma-vichara or jnana).

Despite each path leading to the same goal, Sri Ramana advocated Self-enquiry as the most efficient and direct method to realizing the Self, by paying constant attention to the inner awareness of “I” or “I am”, leading to total liberation from the mind and an opening of the heart, all pervaded by the power of silence.

Jnani contains rare digitally-remastered, black-and-white footage of Sri Ramana and contemporaneous ashram life, including devotees and visitors to the holy hill, as well as a multifarious array of animals and birds.

Moreover, the haunting soundtrack, featuring enchanting Indian melodies played by the bansuri flute master, Upahar, renders the entire film a beautiful and moving experience and is a “must see” for all those committed to discovering their innermost selves.

With so many films serving only to stimulate superficial and sensory enjoyment, it is a welcome change not only to engage in a piece of work so aesthetically and intelligently accomplished but also that the very partaking of it instigates a feeling of profound peace long after the final scene.

Visit Jnani.tv for a selection of viewing options available and more information about the film. 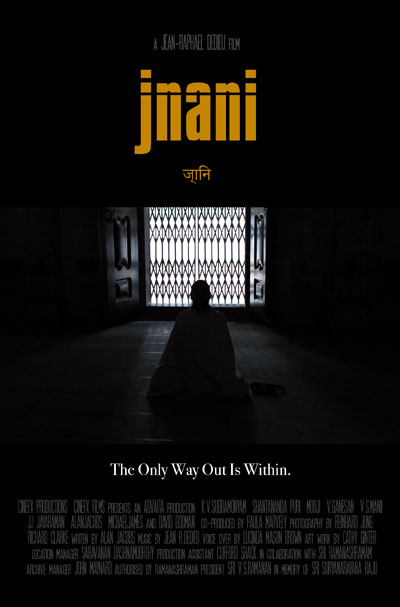 We are honored to guest share the above post titled Jean R. Dedieu: Jnani, The Silent Sage of Arunachala (Jan 22, 2016), from The Culturium, about Ramana Maharshi (one of our featured teachers). It is RE-published here in its entirety with kind permission from the post author, Paula Marvelly – the Creator and Editor of The Culturium, a magnificent site about Art and Consciousness.

A guest post about “what is The Culturium?” authored by Paula, was published July 17, 2016.