Unfolding your own myth: “… Chase a deer and end up everywhere! … It’s all a mystical journey to the Friend …” ~ Rumi 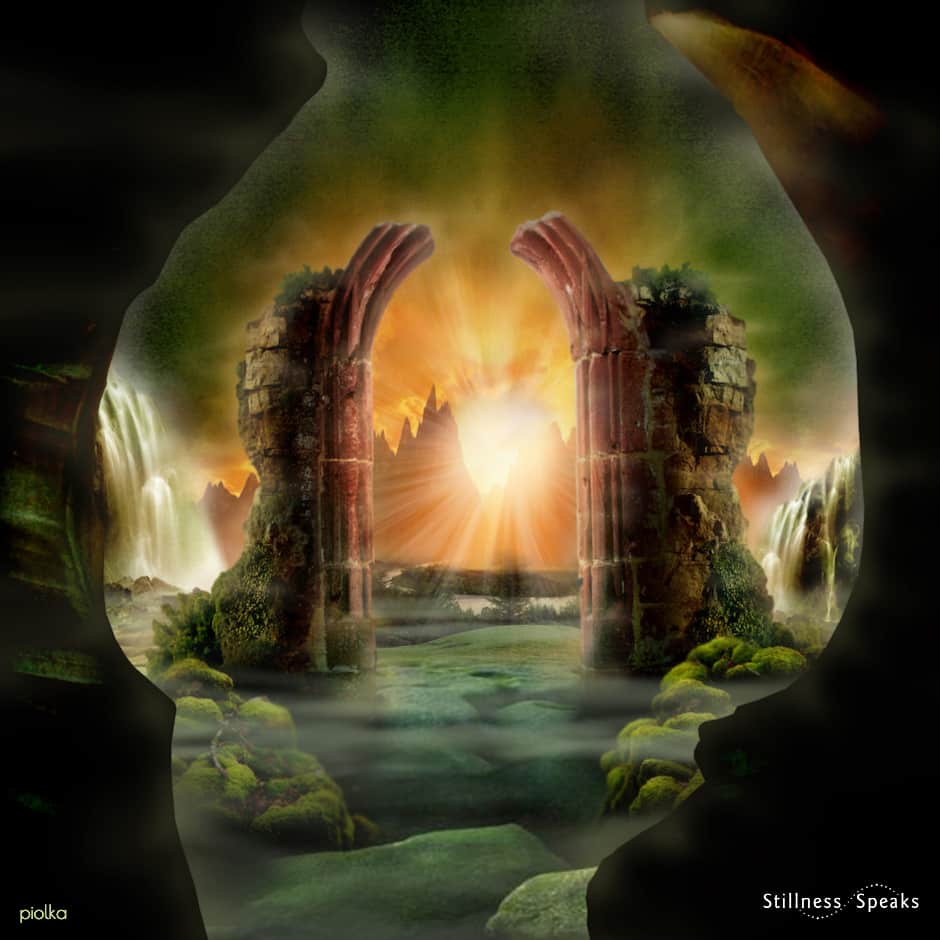 The Self discovery journey is unique, intimate, unpredictable, terrifying yet exhilarating … and of course lot more than that. Each of us “finds” our “place” and “method” or “practice” of “connecting with our inner self.” Maybe it is early dawn meditation at home … or sitting in a zendo morning or evening or some prescribed time – alone or with a sangha – … or visiting a church or temple or mosque … or go on a solo-retreat in nature or at a monastery or spiritual sanctuary … or anything that “waters the budding soul seeds” …

Rumi does this daily “soul building” in what he calls the “far mosque.” Coleman Barks talks about this in the preamble of the chapter titled A Green Shawl: Solomon’s Far Mosque in his book The Soul of Rumi :

“… Rumi tells of Solomon’s practice of building each dawn a place made of intention and compassion and sohbet (mystical conversation). He calls it the “far mosque.” Solomon goes there to listen to the plants, the new ones that come up each morning. They tell him of their medicinal qualities, their potential for health, and also the dangers of poisoning …”

Coleman continues in that same preamble:

“… Rumi often hears it as the birdlike song-talk that begins at dawn under the dome of meditation. Build a far mosque where you can read your soul-book and listen to the dreams that grew in the night. Attar says,

Let love lead your soul.
Make it a place to retire to,
a kind of cave, a retreat
for the deep core of being.

Regardless of where/how this “soul building” is, what is important is to deepen the self discovery and hopefully, in a practical, worldly sense recognize what am i as an individual here for? what is my unique “journey” in the universe? what is “my myth?”

… and Rumi also underscores this “task of tasks” by recommending that we “unfold our own myth” and be aware that “all plans are subject to revision” because “God lives between a human being and the object of his or her desire.”

Unfold Your Own Myth

Who gets up early to discover the moment light begins?

Who finds us here circling, bewildered, like atoms?
Who comes to a spring thirsty
and sees the moon reflected in it?
Who, like Jacob blind with grief and age,
smells the shirt of his lost son
and can see again?
Who lets a bucket down and brings up
a flowing prophet? Or like Moses goes for fire
and finds what burns inside the sunrise?

Jesus slips into a house to escape enemies,
and opens a door to the other world.
Solomon cuts open a fish, and there’s a gold ring.
Omar storms in to kill the prophet
and leaves with blessings.
Chase a deer and end up everywhere!
An oyster opens his mouth to swallow one drop.
Now there’s a pearl. A vagrant wanders empty ruins.
Suddenly he’s wealthy.

But don’t be satisfied with stories, how things
have gone with others. Unfold
your own myth, without complicated explanation,
so everyone will understand the passage,
We have opened you.

Start walking toward Shams. Your legs will get heavy
and tired. Then comes a moment
of feeling the wings you’ve grown,
lifting.

The implications of “unfolding your own myth” are profound as Rumi says in the above poem “… Chase a deer and end up everywhere …” … or as he says in his account of Ibrahim’s epiphany: “… It’s all a mystical journey to the Friend …” Coleman provides Rumi’s accounting of Ibrahim’s story – or the unfolding of Ibrahim’s myth – in the Notes section of The Essential Rumi:

The line “Chase a deer and end up everywhere!” is a reference to Ibrahim (d. 783), whose story is given below. A prince of Balkh, Ibrahim represents to the sufis someone who in one visionary moment gives up his external kingdom for the inner majesty. There are striking similarities between his life and Gautama the Buddha’s. Balkh seems to have been an area where Buddhism, Islam, and Christianity met and blended; lotus motifs appear on the ancient ruins there. Here is Rumi’s account of Ibrahim’s epiphany:

Ibrahim, when he was still king, went out hunting. As he galloped after a deer, he became separated from his retinue. His horse was tired and lathered, but still Ibrahim rode. Deep in the wilderness, the fleeing deer turned its head and spoke, “You were not created for this chase. This deer body did not take shape out of nothingness, so that you might hunt. Supposing you catch me, will that be enough?”

Ibrahim heard these words deeply and cried out. He reined in his horse and dismounted. There was a shepherd nearby. “Take this royal jacket sewn with jewels. Take my horse and my bow. Give me your shepherd’s robe of coarse cloth, and tell no one what has happened!”

The exchange was made, and Ibrahim set out on his new life. He made such an extraordinary effort to catch the deer and ended up being caught by God! All plans are subject to revision. God lives between a human being and the object of his or her desire. “It’s all a mystical journey to the Friend.”

See more on Coleman in one of our earlier posts Ocean Love: The Larger Love – Rumi … or The Dream That Must Be Interpreted – Rumi (you must scroll to the bottom).

Jung’s Quote from The Innateness of Myth: A New Interpretation of Joseph Campbell’s Reception of C.G. Jung.
Poem and all italicized text (before and after the poem in blockquotes) from The Essential Rumi – reissue: New Expanded Edition, translated by Coleman Barks and John Moyne

Images (edited and logo added): Featured and 1) Phantasy Landscape by piolka, 2) Sunrise on Gueirua beach in Asturias, Spain StockPhotoAstur, 3) TBD. All Purchased from depositphotos, for use only on our website/social channels (these images are not permitted to be shared separate from this post).

Root Of The Root Of Your Own Soul