Beyond Biocentrism: Rethinking Time, Space, Consciousness, and the Illusion of Death

Biocentrism shocked the world with a radical rethinking of the nature of reality.

But that was just the beginning.

In Beyond Biocentrism, acclaimed biologist Robert Lanza, one of TIME Magazine’s “100 Most Influential People in 2014,” and leading astronomer Bob Berman, take the reader on an intellectual thrill-ride as they re-examine everything we thought we knew about life, death, the universe, and the nature of reality itself.

The first step is acknowledging that our existing model of reality is looking increasingly creaky in the face of recent scientific discoveries. Science tells us with some precision that the universe is 26.8 percent dark matter, 68.3 percent dark energy, and only 4.9 percent ordinary matter, but must confess that it doesn’t really know what dark matter is and knows even less about dark energy. Science is increasingly pointing toward an infinite universe but has no ability to explain what that really means. Concepts such as time, space, and even causality are increasingly being demonstrated as meaningless.

All of science is based on information passing through our consciousness but science hasn’t the foggiest idea what consciousness is, and it can’t explain the linkage between subatomic states and observation by conscious observers. Science describes life as an random occurrence in a dead universe but has no real understanding of how life began or why the universe appears to be exquisitely designed for the emergence of life.

The biocentrism theory isn’t a rejection of science. Quite the opposite. Biocentrism challenges us to fully accept the implications of the latest scientific findings in fields ranging from plant biology and cosmology to quantum entanglement and consciousness.

By listening to what the science is telling us, it becomes increasingly clear that life and consciousness are fundamental to any true understanding of the universe. This forces a fundamental rethinking of everything we thought we knew about life, death, and our place in the universe. 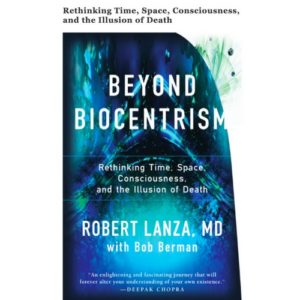