Bhagavad Gita: In the Light of Kashmir Shaivism Features/Benefits:

• Includes free downloadable audio of original lectures.
• Bhagavad Gita means The Song of God. It is a 700-verse Hindu scripture from the epic Mahabharata.
• This is one of the most important of all Hindu scriptures.
• This translation, as seen through the lenses of Kashmir Shaivism by the great Master Swami Lakshmanjoo, teaches that we ourselves are warriors in a great battle for liberation.

This treasure of knowledge was one of the last works by Swami Lakshmanjoo. He said, “It was a new revelation of the supreme secrets, hidden in the Kashmiri recension of the Bhagavad Gita.” Based on Abhinavagupta’s commentary of the Gitarthasamgraha, “The Essence of the Gita”, Swamiji declared that, “this revelation was initiated by his direct experience of the state of Universal God Consciousness. Here Swamiji reveals the unique and liberating teaching of Kashmir Shaivism which proclaims; “Freedom from all our miseries, as Abhinavagupta boldly declares, can neither be obtained through renunciation of the world, nor by hatred of the world, but by experiencing the presence of God everywhere.” At last, the secret and profound meaning of the Bhagavad Gita “The Lord’s Song” is being made available for the spiritual illumination of all humankind. 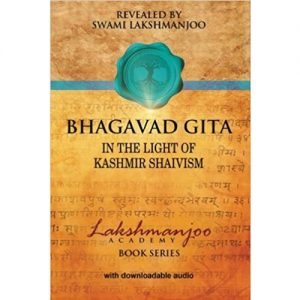