This is a very unusual video extracted from a two week long retreat with Francis Lucille, filmed in 2008. In this dialog, the questioner got a surprise answer from Francis Lucille–from a completely unexpected direction. In fact, the question was apparently completely discarded in favor of a very exact set of instructions on a different matter altogether. But, was it? The answer was pivotal in the student’s journey; later, it was exceptionally clear that the answer encompassed both the stated question but also the questioner’s core, deepest dilemma.

This dialogue illustrates the deep value of the role of the teacher, demonstrating how the teacher/student relationship allows for the teacher to craft his answers in ways specific to the student’s needs. Of course, this is enhanced by the student being in close proximity to the teacher, consistently, over time.

Additionally, to those who can perceive it, there is a unspoken perfume in the silence which punctuates this dialogue. Although capturing the “power of transmission” in film is difficult–some would say impossible–we would vote that this dialogue captures the unspoken, the true teacher, as well as any we have ever seen.

This DVD has become a classic over the years, and many who travel to meet Francis ask questions regarding the content of this specific dialogue. 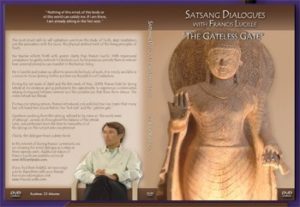