Karl Renz – The Absence of a Tendency of Avoidance

“Enlightenment is the spontaneous cognition to be prior to ‘Nothing at All.’ Entirely unprepared, in spite of and not because of the search for cognition at all. It is the revelation of The Eternal Now. The absence of the ‘me’ and thus, the absence of all concepts, of separation or union, birth and death, God and world, coming and going. The ABSOLUTE is aware of itself and is thus that which is. Pure self cognition, in cognizing that all that is cognizable is false. The absolute death of time and of all which is seemingly in time.” ~ Karl Renz

“I first met Karl Renz traveling through India. His “teaching” style was unique: piercing, uncompromising, spontaneous, humorous and koan-like, much like lightning striking the mind. His directness while teaching is intimidating; as I got to know him, I was surprised to discover a gentle, deeply friendly man, whose company I now cherish. Karl is not afraid to shock and his comments, in fact, may be designed to shake you free from logic altogether. The mind is simply not invited to this party, but in openness, if you are willing to deeply listen to this message you will discover great wisdom born of first-hand experience. As I conducted this interview and, later, as I edited the project, each review of the content revealed deeper revelations until its full bouquet engulfed me. Each time I encountered an answer that did not “make sense,” I was initially tempted to pass over it. The treasure only revealed itself when I repeatedly returned to those mysterious comments and allowed them to unfold their hidden meaning. Watch and carefully listen to this dialogue, repeatedly and then let the treasure reveal itself. I hope you enjoy this remarkable journey with Karl Renz.” Chris Hebard 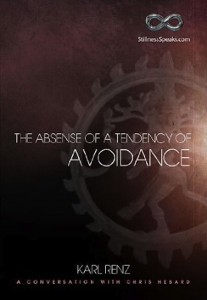