Light on Tantra in Kashmir Shaivism: Chapter One of Abhinavagupta’s Tantraloka

This profound text is concerned with the philosophy and practice known as Kashmir Shaivism. On account of its size and scope it is a veritable encyclopedia of non-dual Shaivism.

Why was the Tantraloka written?

In answer to this question Abhinavagupta tells us that, although in the schools of Kashmir Shaivism there are many wonderful and important ways and methods for attaining the supreme reality, yet in his time not even one was still existing. All of those ways and methods were lost. It is for this reason that he was requested by his colleagues and disciples to create a text that would illuminate and clarify all of these ways and methods of Kashmir Shaivism. To accomplish this, Abhinavagupta composed the Tantraloka, a text, which he tells us is filled with the complete explanation of the ways and methods associated with Kashmir Shaivism. That is to say that the philosophical understanding on the level of the intellect might have been existing, but the actual practical means or methods to be used to attain the supreme reality – oneness with Universal Being – to which they all pointed was lost. Abhinavagupta was intent, therefore, to revive the true understanding of these very important teachings, to make the practices that they embodied live again. For what is the use of a map if you have no way to reach the destination? Thus, Abhinavagupta gave us the Tantraloka to remedy this situation.

The Tantraloka is composed of thirty seven chapters (ahnikas). Each chapter has its own distinct topic.

In this present volume – chapter one – Abhinavagupta lays the groundwork for the rest of his Tantraloka. Here are some of the topics Abhinavagupta examines in the first chapter:

• The important Masters of the schools of Kashmir Shaivism.
• The differentiated perception of all the means and methods (upayas).
• The difference between knowledge, ignorance and liberation.
• The essence of what is to be recognized, i.e., the real object to be known.
• The oneness of Shiva and His energy (Shakti).
• Introduction to the means and methods (upaya) for attaining full and pure knowledge where you perceive your nature as one with the universe.
• True liberation in Kashmir Shaivism.
• A discussion of the four states of means (upayas).
• Three variations of absorption or trance (samavesha) as mentioned in the Malinivijaya Tantra.
• The contents of each of the thirty seven chapters of Tantraloka. 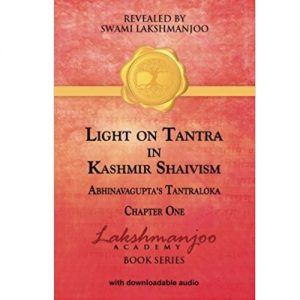