The Precious Treasury of Philosophical Systems

The Seven Treasuries Series: A Treatise Elucidating the Meaning of the Entire Range of Buddhist Teachings

The Precious Treasury of Philosophical Systems discusses the philosophical tenets of the entire spectrum of Buddhist teachings-Hinayana, Mahayana, Vajrayana, and Dzogchen. This series consists of the volumes written by Longchen Rabjam that, as a group, have come to be known as The Seven Treasuries. Although, Longchenpa did not intend them to be series, scholars traditionally treat them as such because of their interrelated themes. 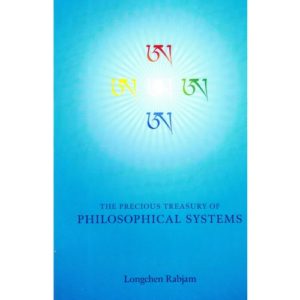