Quarreling with God: Mystic Rebel Poems of the Dervishes of Turkey

This collection presents, for the first time in English, a compilation of seven centuries of the mystic hymns of Turkey’s rebellious Sufi poets. At the time Rumi was writing in ancient Anatolia, many other great mystics in the region were also composing wild, ecstatic, and controversial poems that were shared among the people as spiritual songs. Many are still played and sung today in sacred dervish ceremonies. Poet Jennifer Ferraro and translator/performer Latif Bolat have organized the poems into insightful themes and also provide concise but essential cultural context that helps us swiftly join the rebels in their reverie. Quarreling with God welcomes us into a spiritual tradition from the Islamic world that bravely challenged orthodox religion and emphasized universal mystic love and tolerance. These songs reach across the ages to awaken your heart to our divine inheritance. 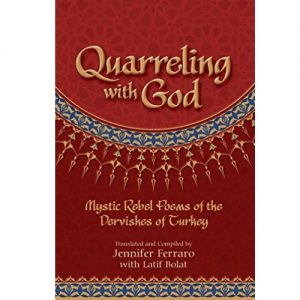