Spiritual Ecology: The Cry of the Earth

The first edition of this book fostered the emergence of the “Spiritual Ecology Movement,” which recognizes the need for a spiritual response to our present ecological crisis. It drew an overwhelmingly positive response from readers, many of whom are asking the simple question, “What can I do?”

This second expanded edition offers new chapters, including two from younger authors who are putting the principles of spiritual ecology into action, working with their hands as well as their hearts. It also includes a new preface and revised chapter by Llewellyn Vaughan-Lee, that reference two major recent events: the publication of Pope Francis’s encyclical, “On Care for Our Common Home,” which brought into the mainstream the idea that “the ecological crisis is essentially a spiritual problem”; and the 2015 Paris Climate Change Conference, which saw representatives from nearly 200 countries come together to address global warming, including faith leaders from many traditions.

Bringing together voices from Buddhism, Sufism, Christianity, and Native American traditions, as well as from physics, deep psychology, and other environmental disciplines, this book calls on us to reassess our underlying attitudes and beliefs about the Earth and wake up to our spiritual as well as physical responsibilities toward the planet. 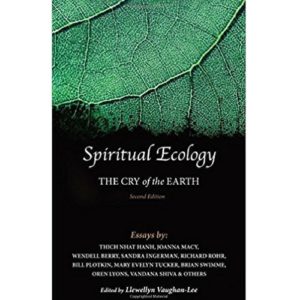