Ten days before Maharshi’s Maha Nirvana … seeing him was strictly restricted because of his health condition. However a devotee called G.V. Subbaramayya and invited him to the Master’s presence. As he entered the small room where he lay, Maharshi said, “Come in.” As I went in and stood before Him, Sri Ramana asked me in Telegu, “What do you want?”

I said with streaming eyes:

At once I felt as though a heavy load were lifted from my heart and as I touched His Lotus Feet with my hands and head a thrill of ecstasy passed through my frame, and I felt like being plunged in an ocean of Peace and Bliss. That vision of Sri Maharshi and His gracious words granting me Abhayam (fearlessness) have taken permanent abode in my being and are guarding me from all life’s ills.

This book is a must read for those pursuing His path while leading the life of a family man. It shows how divine compassion supports us in very difficult tragic circumstances. The author lived a life that most of us can relate to and Master’s guidance and solace to him touches our Hearts directly. 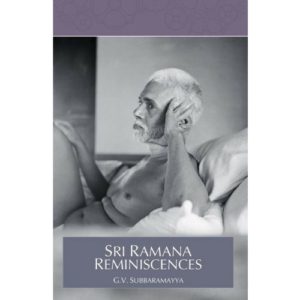