The days when we in the West looked toward the Eastern religious traditions for enlightenment are coming to an end. Western Spirituality has come into its own, drawing on the rich philosophies of Zen, Hinduism, Advaita Vedanta, Kashmiri Shaivism, Judaism, and Christianity.

In its earlier incarnation as a self-published book, The Awakening West sold out of its first printing of 3000 copies and went into a second printing–all sales through the web site and authors’ events. The book is destined to become a classic, as it establishes Western spiritual thought as a tradition in its own right—a new and growing branch of philosophy and teaching with its own take on enlightenment.

Lynn Marie Lumiere is a licensed Marriage, Family Therapist in private practice. An ardent spiritual seeker, she specializes in the integration of non-dual wisdom and psychotherapy. She lives in the San Francisco Bay area. John Lumiere-Wins is a certified hypnotherapist and spiritual counselor with 20 years’ experience in the mental health field and with Eastern and Western spiritual practices. 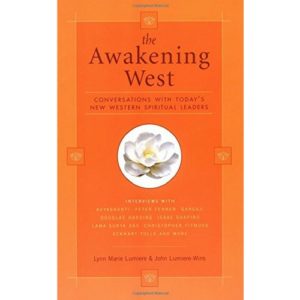