When the thirteenth century master Eihei Dogen, one of the most influential thinkers in Zen Buddhism and founder of the Japanese Soto school, returned to Japan after four years of study in China, the fruit of his pilgrimage was recorded in a collection of koans called the Chinese Shobogenzo, also known as Shinji or Mana Shobogenzo. This collection of three hundred main cases was first published in 1766 under the title Shobogenzo Sambyakusoku (Treasury of the True Dharma Eye: Three Hundred Cases), and was known to have provided the raw material for much of Dogen’s better known Japanese-language Kana Shobogenzo.

Dogen’s collection of koans may come as a surprise to students of Zen as Dogen and the Soto school are generally known for the practice of shikantaza, or “just sitting,” rather than for koan practice. Nevertheless, a careful study of Dogen’s work reveals that he did use koans extensively in his writing and teaching, not only in the Kana Shobogenzo, but most of his other works as well. Zen students and scholars will find The True Dharma Eye to be a source of deep insight into the mind of one of the world’s greatest religious thinkers, as well as the practice of koan study itself.

Following the spirit of Dogen’s pioneering efforts to carry the dharma across cultural divides, John Daido Loori Roshi, one of the West’s most respected Zen teachers, has added his own verses and commentaries to each koan. The resulting volume presents readers with a uniquely contemporary perspective on Dogen’s profound teachings and their relevance for twenty-first-century Western practitioners of Zen. 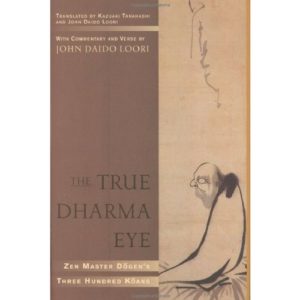