A central theme of the philosophy of Kashmir Shaivism is the highly esoteric principal known as spanda. Swami Lakshmanjoo tells us that the word ‘spanda’ means established stable movement. That is, it is movementless-movement, vibrationless-vibration. It is this secret, mysterious and yet essential principle that Swami Lakshmanjoo clarifies and elucidates in his revelation of the two texts dealing specifically with this principle, the Spanda Karika and the Spanda Sandoha.

The theory of spanda is not new. It was hidden in the body of the Tantras and extracted by Vasugupta, founder of the Shiva Sutras, and initiator of monistic Shaivism in the valley of Kashmir. Vasugupta composed the Spanda Karika, a text filled with the fundamental precepts (karikas) regarding spanda and the philosophy surrounding it.

Kṣhemaraja, the chief disciple of the very important and central figure in the tradition of Kashmir Shaivism, Abhinavagupta, is the author of the second pivotal text regarding spanda, the Spanda Sandoha. This text is an extensive exposition (sandoha) on the first verse of the Spanda Karika. 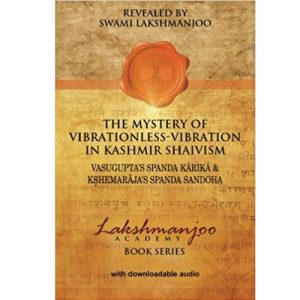