Life’s most persistent and urgent question is: what are you doing for others? ~ Unknown 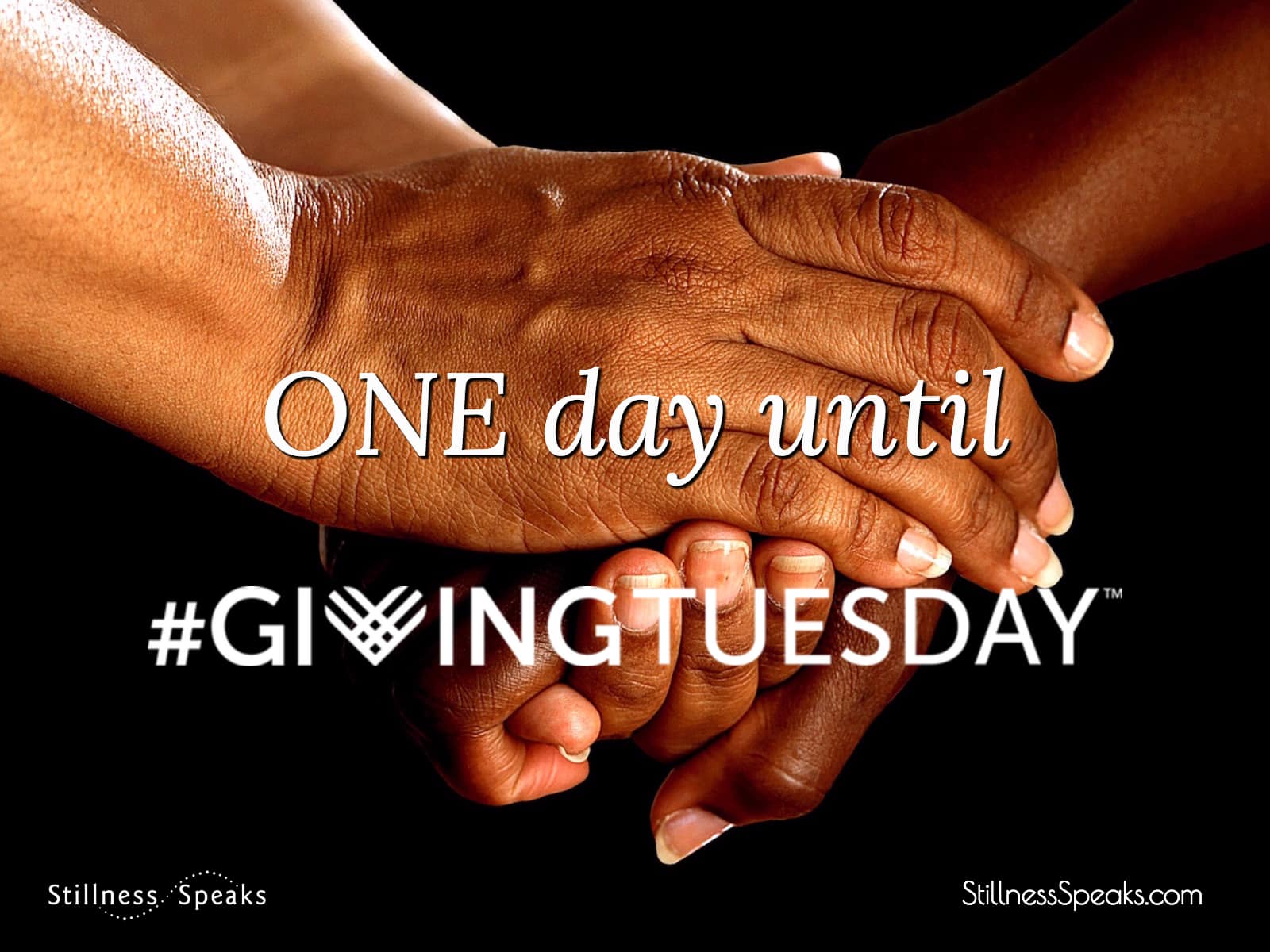 “On Tuesday, November 28, 2017, charities, families, businesses, community centers and students around the world will come together for one common purpose: to celebrate and encourage giving.

#Giving Tuesday is a global giving movement that has been built by individuals, families, organizations, businesses and communities in all 50 states and in Countries around the world. Millions of people have come together to support and champion the causes they believe in and the communities in which they live.

Anyone, anywhere can get involved in #Giving Tuesday and give back in a way that is meaningful to them.”
~ from Giving Tuesday

As part of our #GivingTuesday campaign, Stillness Speaks will raise funds to support the relief efforts for the hurricane ravaged Puerto Rico: 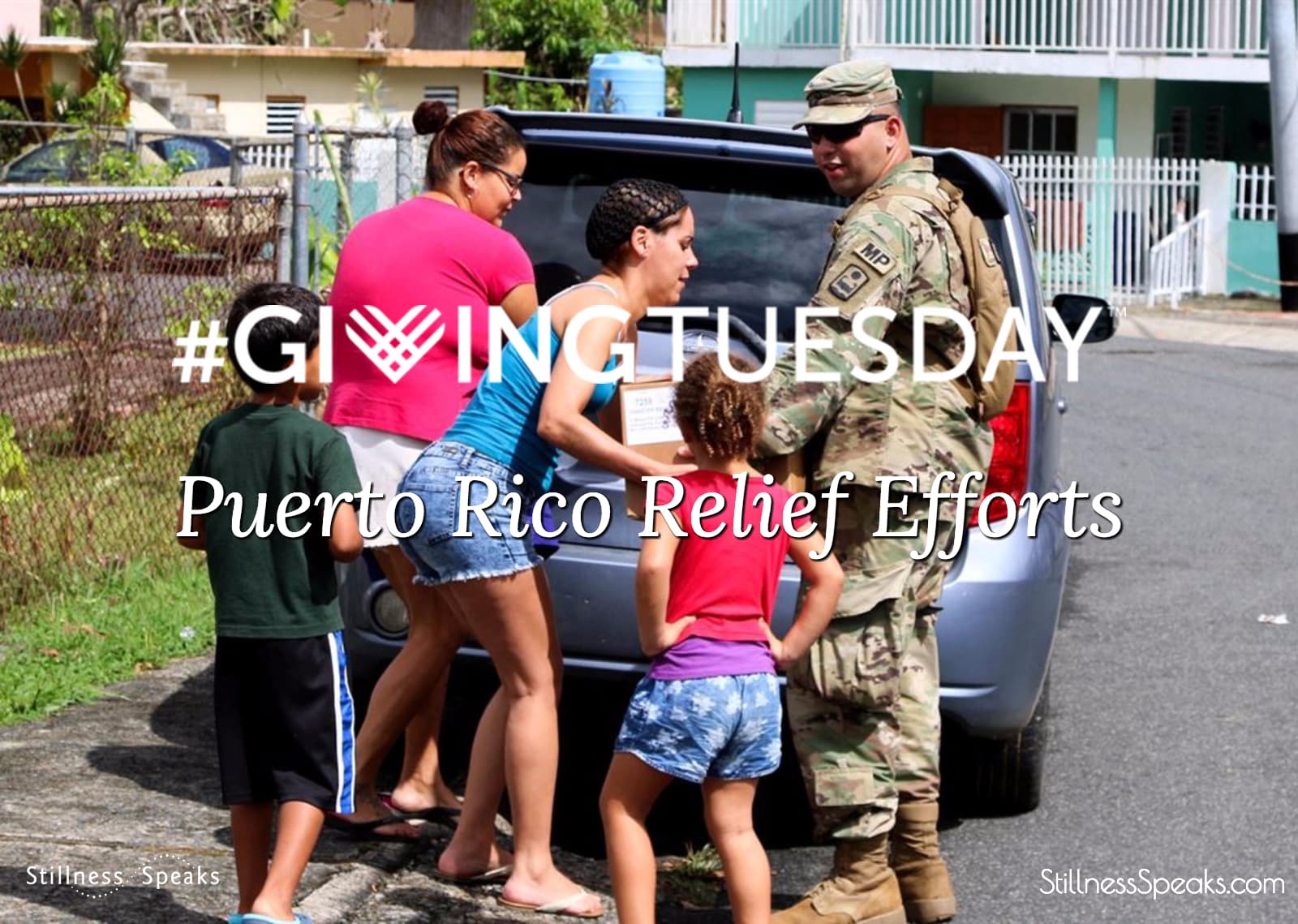 Hurricane Maria wrecked Puerto Rico with a direct hit as a Category 5 hurricane and winds measuring over 150mph. Now, the hurricane aftermath has turned into a humanitarian crisis. The island still has little power and water, fuel and food are still extremely scarce. Experts estimate it could be up to six months before power is restored to the island and that the death toll will reach into the hundreds. The island is in desperate need of aid, which you can send via the links below.

From ~ The Worst Natural Disasters of 2017 and What You Can Do To Help by Jeffrey Preis.

50% of all funds raised for the #GivingTuesday campaign (from Tue November 21st – Wed November 29th, 2017) will be given to organizations that are supporting the relief efforts in Puerto Rico. Full details will be posted on our website after the campaign re what was raised and given. Our goal is to raise $10K for the relief efforts.

Also, we are very grateful and excited to note that a generous donor will match the first $10,000 raised … so your impact can be DOUBLED !

Upon reviewing various organizations providing relief, we concluded that United for Puerto Rico is an organization worth supporting … below are some highlights of their background and efforts … for more details please visit their website.

United for Puerto Rico is an initiative brought forth by the First Lady of Puerto Rico, Beatriz Rosselló, in collaboration with the private sector, with the purpose of providing aid and support to those affected in Puerto Rico by the passage of Hurricane Irma and Hurricane María.

Their mission is to “Provide assistance to individuals and small businesses devastated by Hurricanes Irma and María accelerating their recovery by supporting the reestablishment of their home, food & to satisfy their needs of shelter, food and health to help rebuild their lives, communities and Puerto Rico.”

The First Lady of Puerto Rico, Beatriz Rosselló has garnered support from corporate giants and as a result, her work is being sponsored by “Banco Popular, Coca-Cola, Burger King, Walmart, Walgreens, JetBlue and Bacardi.”

Some further highlights from their recent post about the current state of affairs:

United by Puerto Rico was born as an initiative of the Office of the First Lady, Beatriz Rosselló, but as soon as Hurricane Maria left Puerto Rico, leaving behind its destruction, the project passed into the hands of the private sector, which registered it as an entity without for profit and since then manages it.

Today it is run by a Board of Directors of nine executives of well-known companies or with important local operations. These companies made substantial initial donations to the fund. There are also three ex-officio members, who are the first lady, the director of his office, Luis A. Martínez, and the secretary of the Treasury, Raúl Maldonado.

“This movement, which begins as Together and United for Puerto Rico, is born of that intention to join efforts under Irma, María falls and we have to redouble our efforts and that is when I believe that there was that fascinating moment in which it is recognized that the government just does not it can do it, the private company alone can not do it, nor the third sector, so we are going to extend the invitation for the collaborations and that is where this synergy is created, “he added.

Currently the process is in the “relief” phase and in that context, he said, it places the entity’s strategy of using the numerous non-profit organizations that exist in Puerto Rico to channel aid, with the conviction that They will reach more people and the needy.

Please donate to support the recovery … and in the process, also help support Stillness Speaks.

Mark your calendars, spread the word, and give generously!