separation: “… When the story of separation is believed, solidity and reality are given to limitations and divisions that don’t actually exist …”  ~ Joan Tollifson 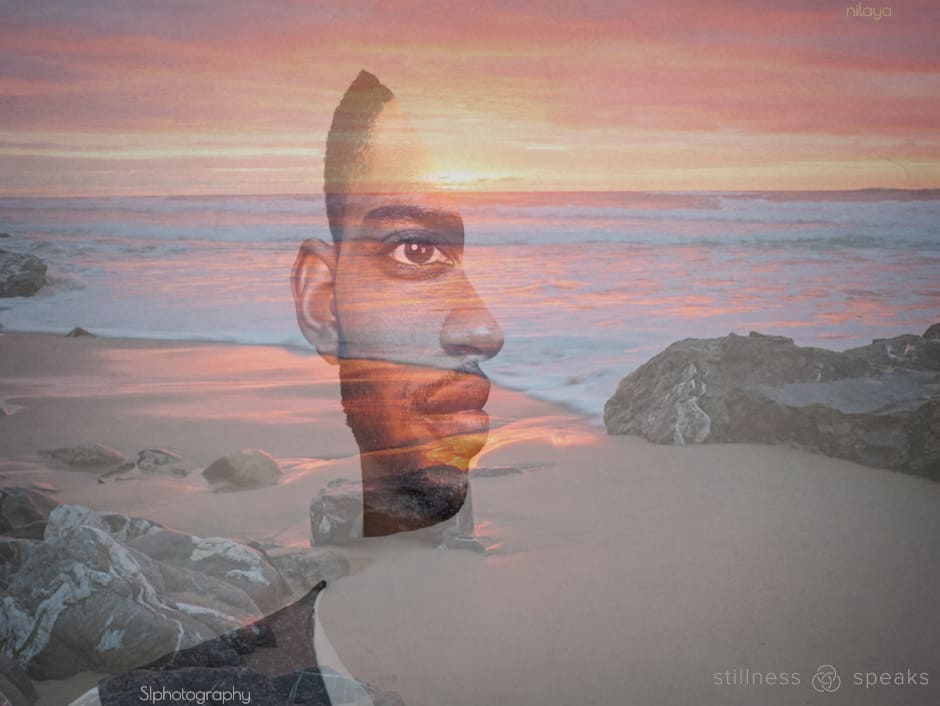 Indeed, the story of separation – rather the illusion of separation – comes in many many forms because the mind tends to focus on “differences” thus missing what Rumi says is “… closer than breath …” … or as Nisargadatta Maharaj says “… As long as you see the least difference, you are a stranger to reality. You are on the level of the mind …” …

Or as Joan Tollifson elaborates: “… Spirituality is not about “you” as a person becoming a perfect channel. Nor is it about you always feeling a sense of seamless flow, or having a sustained experience of oneness. It is rather about realizing that you are the whole, all the blockages and all the openings, all of it a dream-like appearance that vanishes in an instant …” … 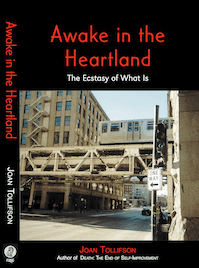 So, today, in this part 3 … of our multi-part series exploring the 2022 edition of Awake in the Heartland: The Ecstasy of What Is (original edition 2003) through chapter excerpts … Joan Tollifson unpacks this illusion of separation by taking us on a deep dive into the question Who Am I? … which is the next sub-chapter in her book …

… in Part 1, we set the stage for the series with the 2022 Preface and the first two sub-chapters – A Sea of Jewels and This Is It

… in Part 2, Joan posits that you are the present moment … via the sub-chapter of the same title … and goes further by asking if it is possible for us to find a boundary …

All italicized text above and below (except Rumi’s quote re breath) is from Awake in the Heartland: The Ecstasy of What Is by Joan Tollifson (2022 edition by New Sarum Press) and is published here with her generous permission.

AND, Here are all of Joan’s posts on Stillness Speaks … and her website – full of deeply insightful and valuable content for your journey.

Who Am I? : The Separation Illusion

The universe is uncaused, like a net of jewels in which each is only the reflection of all the others in a fantastic interrelated harmony without end. ~ Ramesh S. Balsekar

Certainly there is some reality to the idea of separation, you may say. I can lift my arm, but not your arm. Likewise, I can feel the headache in my head, but not the one in your head. There must be some real separation between us and some kind of independent, individual intelligence contained inside each of us. Certainly “the world” was here long before “I” was born into it, and will persist long after “I” have died. Surely, it is “out there,” separate from “me.”

It’s a very convincing picture. But where is all of this actually happening? Notice that right now, absolutely everything perceivable or conceivable IS inside of you, inside of awareness. You can think about “somewhere else,” you can imagine and conceptualize it, but that thought is always happening here, in present awareness.

The only “you” that “I” know about is made up of sensations, perceptions, conceptualizations and memories appearing in present awareness here and now—visual images, sounds, smells, touch—organized conceptually into the idea of “you,” supposedly “out there” in space, separate from “me.” It all happens here. That is true of every apparent “I” and every apparent “you.” We are sensations and memories inside one another, so which is which? How real is the separation? 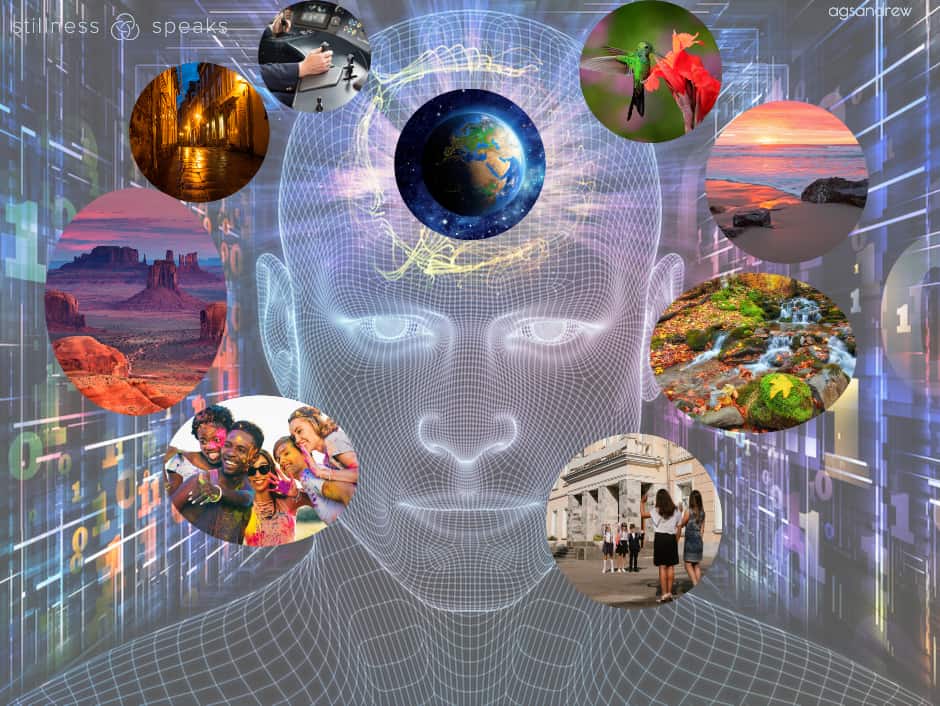 There is certainly apparent diversity, differentiation and uniqueness, but is that the same thing as actual separation and independence? I can’t live for more than a few minutes without oxygen, and not for more than a few days without water, or a few months without food. I am utterly dependent upon the environment that seems to contain me. In fact, there is no real separation between me and the environment, between mind and body, between me and you. The mind draws imaginary lines and uses different words, but in actuality, it is one undivided whole.

“I can lift my arm.” Where is the I? This is a wonderful question to explore. Take a moment to lift your arm several times. How exactly does it happen? We say “I” do it. But look closely at the actual experience as it happens. How exactly do “you” do this action? How do “you” initiate it? Where does the first impulse come from? In this case, you read a suggestion in this book to lift your arm. Where did this book come from? How did it come into your life? And then you “decided” to do what the book suggested. How did that “decision” get made? Can you actually find this elusive “I” that claims to be in charge of all this? The more you look for this “I,” the deeper into nothingness you plunge. And the more closely you look at any simple action (lifting your arm, visualizing a flower, making a decision, writing a letter), the more mysterious it is. 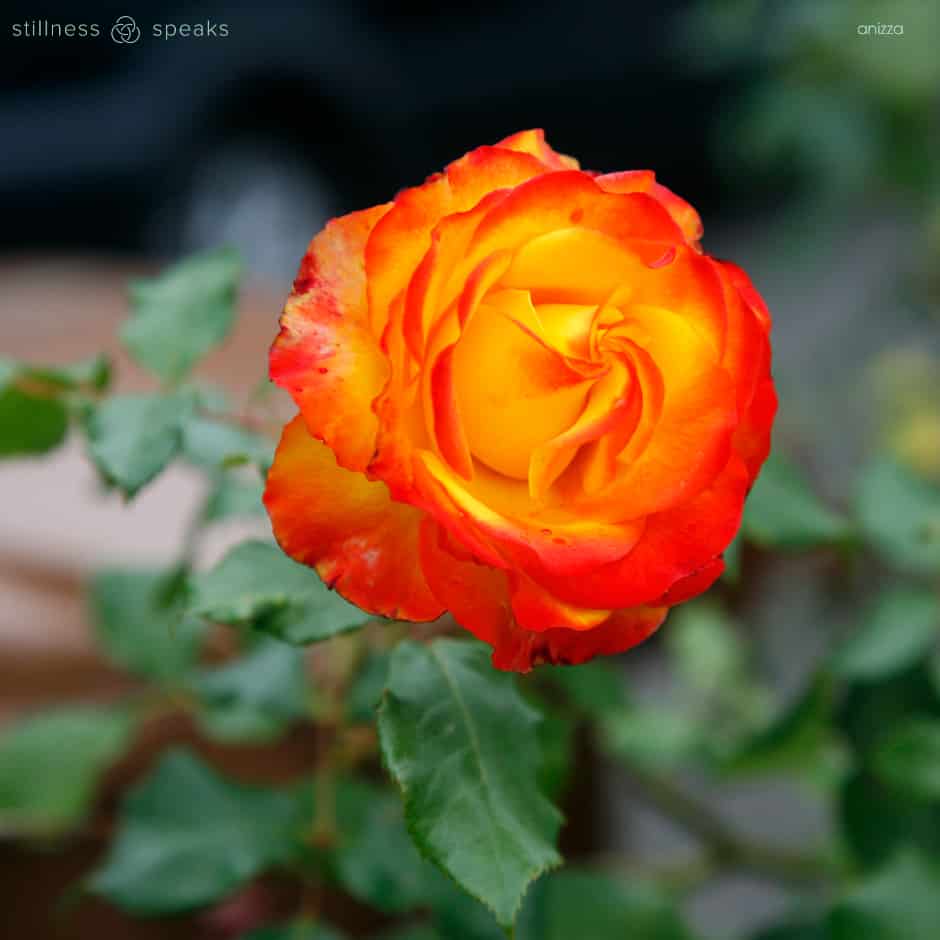 We believe that thinking is something that “I” am initiating, but again, when we observe carefully, thinking also seems to come out of nowhere. We could say it comes out of conditioning, or out of the brain, but where do they come from? Can “you” control what your next thought will be? Or is any semblance of control, and of “you,” merely another thought?

From the moment we are apparently born, we are told our name, our gender, our place in society. We learn to control “our” body. We are alternately praised and scolded for what “we” do, and told that we are responsible for “our” lives. It’s like being gradually hypnotized into a kind of trance. By the time we have reached adulthood, we fully believe that “I” am truly independent and in control of “my” life. “I” could screw the whole thing up. We become obsessed with trying to control the uncontrollable. It never occurs to us that this entire manifestation (movie after movie), along with the main character, along with the entire spiritual search, might all be nothing more substantial than a dream, a play of Consciousness.

By paying attention to our direct experience, we can begin to distinguish the actual subjective experience of “I,” which is nothing more or less than unbounded awareness, from the story of “me,” an ever-shifting series of fictional narratives about a made-up character in a virtual reality, like a television program. 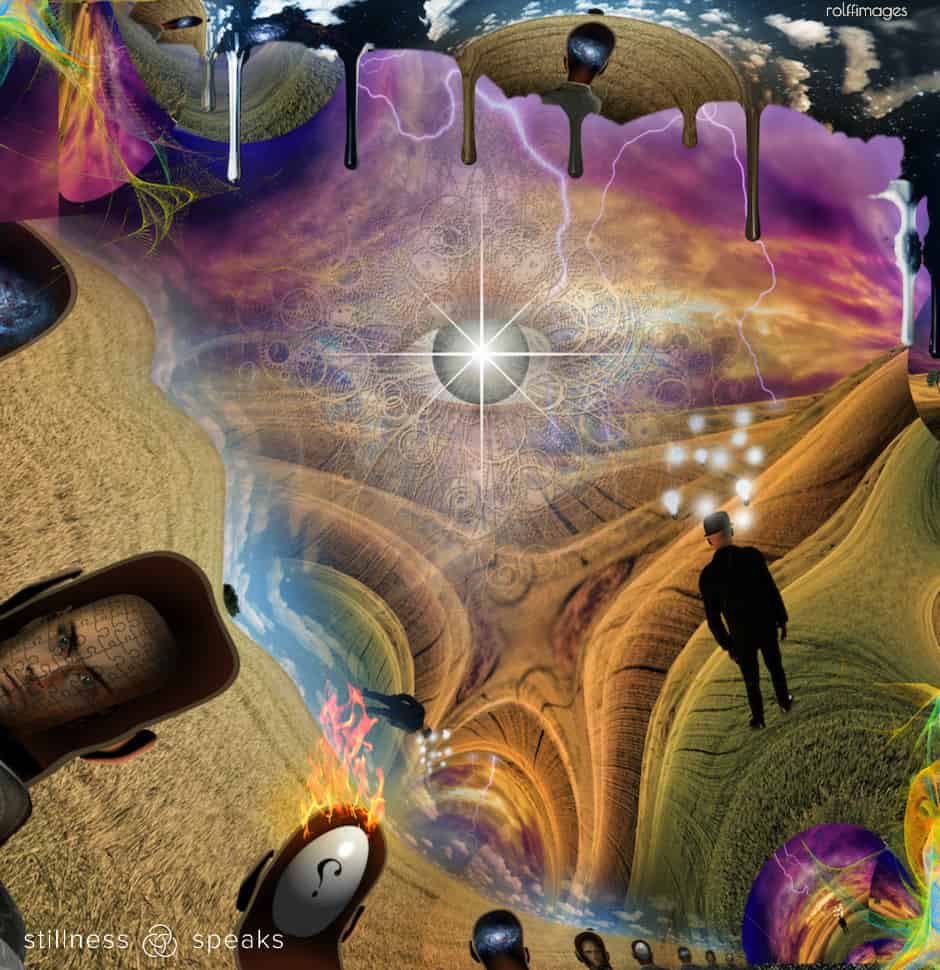 When the story of separation is believed, solidity and reality are given to limitations and divisions that don’t actually exist. Feelings of guilt, blame, self-doubt and self-hatred arise from the story. When we live out of the story, we are lost in daydreams. We miss the miracle of life as it actually is, because we are forever seeking something else. We can’t relate to other people in a truly free and intimate way because we see only our ideas of them, our projections. We keep tripping over imaginary obstacles. On the global scale, we drop bombs on people we have never met, imagining that they are our enemy. God has incredible powers of imagination and visualization.

“We” don’t do any of this. That’s all part of the story. None of this is personal because the apparent “persons” are only imaginary disguises hiding the One Reality, the Absolute. When that truth is seen clearly (by no one), suffering ends. There may still be pain and what we would think of as terrible circumstances. But there will no longer be suffering. Suffering happens only in the story. Suffering is created by the mind.

Whatever appears is only the One Reality. It looks like chairs and tables and bodies and airplanes. Those are all thought-forms, concepts, ideas, ways that perception organizes itself in order to function. And that very functioning that sorts and labels and struggles to survive is itself an activity of that same reality. “I” am not separate from or in control of this activity, anymore than “I” created my own brain. “I” is a thought-form, a sensation. 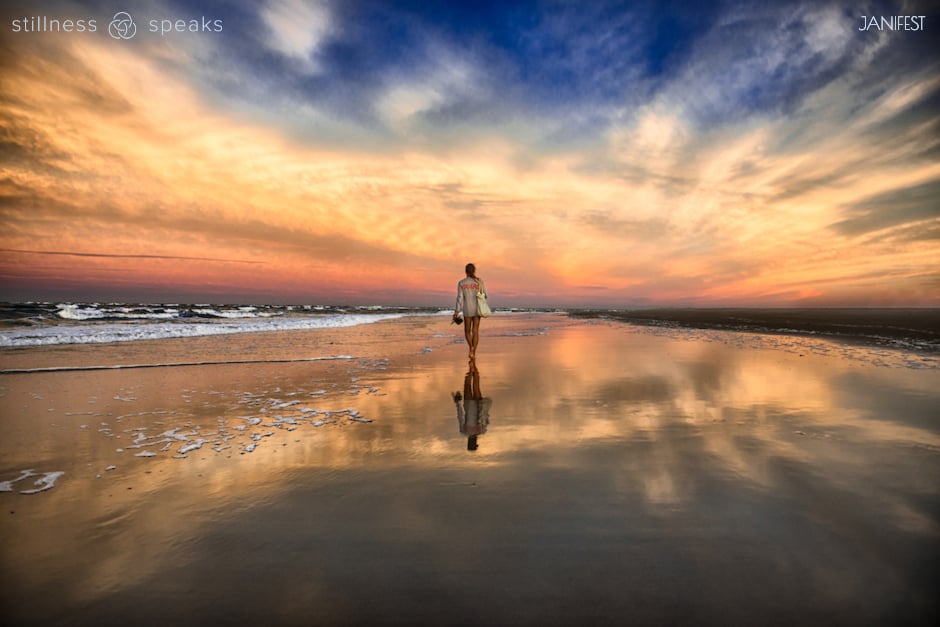 Is the One Reality also a thought-form?

Yes, obviously as soon as we label and conceptualize it, it is. It points to the open space of not knowing, the undividedness of being. But in the blink of an eye, the mind turns no-thing-ness into a thing: a Giant Expanded Ego, an objectified Blankness, an upgraded version of God the Father, some Primal Substance, an assurance that all is well, that we are in good hands despite frequent appearances to the contrary. This book isn’t about believing in some idea that feels comforting. It is an invitation to let every belief go, even the belief in oneness.

Stay tuned for more from Joan’s book … the next sub-chapter titled: Is The World Real?

Acknowledging and piercing through the illusion of separation naturally leads to … being kind and being there for one another … and in that spirit let us minimize (& hopefully dissolve) the current humanitarian crisis unfolding in Ukraine … by helping in whatever way we can … and to that end here are some options:

1) NPR: Want to support the people in Ukraine? Here’s how you can help

2) Washington Post: Here’s how Americans can donate to help people in Ukraine.

3) Go Fund Me: How to Help: Donate to Ukraine Relief Efforts.

4) USA Today: Want to support the people of Ukraine? These apps and websites can help you send money.

Rumi’s quote from Rumi, In the Arms of the Beloved, Translations by Jonathan Star.

Images (edited & Logo added): 1 & Featured) Composite of a) Optical illusion portrait front with cut out profile of a man by SIphotography, and b) Incredible sunset at the atlantic ocean in Portugal by nilaya, 2) Cover page from Joan’s book – New Sarum Press 2022 edition, 3) Composite of a) Digital Thoughts. Lucid Mind series. Backdrop of 3D rendering of glowing wire mesh human face by rolffimages, b) , c) , d) e) , f) , g) , h) , i) , j) k) , 4) Vibrant orange rose by anizza, 5) Surreal scene with large eye by rolffimages, 6) Young woman walking on the beach near the ocean and walking away at the sunset by JANIFEST. #2) provided by Joan for free use on our digital assets. All (except Joan’s book cover image) are purchased from depositphotos, all are for use only on our website/social channels (these images are not permitted to be shared separate from this post).

Ecstasy of What Is – Joan Tollifson

Choiceless Choice: the story of “me” … Joan Tollifson

Presence: You Are The Present Moment – Joan Tollifson