Beyond 5 Sense Based Humanity?

“We are built out of very small stuff, and we are embedded in a very large cosmos, and the fact is that we are not very good at understanding reality at either of those scales.” ~ David Eagleman 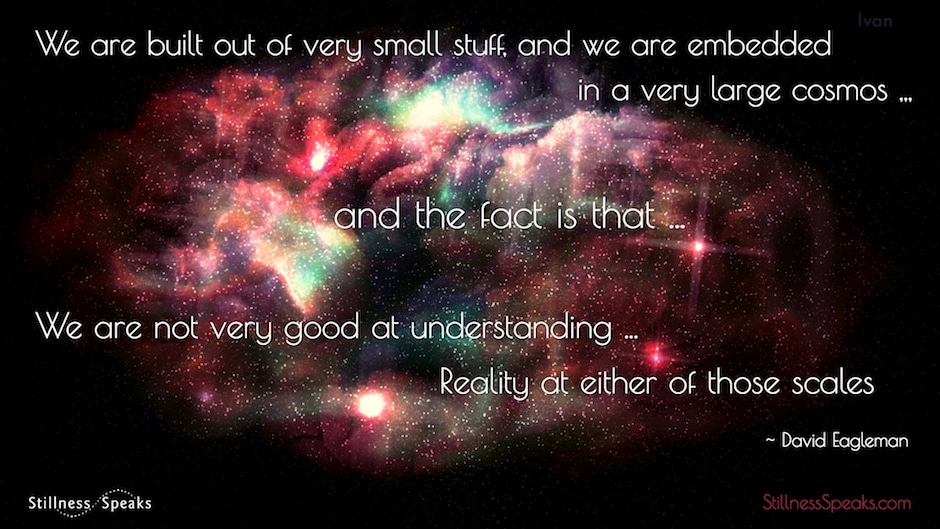 David Eagleman decodes the mysteries of the tangled web of neurons and electricity that make our minds tick — and also make us human. (from TED.com). “Our experience of reality,” says neuroscientist  Eagleman, “is constrained by our biology.”   His research into our brain processes has led him to create new interfaces to take in previously unseen information about the world around us. Read this overview of David’s exciting talk and watch Can We Create New Senses for Humans?  Text in italics, unless otherwise specified, is David’s words from the video.

“As humans, we can perceive less than a ten-trillionth of all light waves.”  David Eagleman continues….

“We are built out of very small stuff, and we are embedded in a very large cosmos, and the fact is that we are not very good at understanding reality at either of those scales, and that’s because our brains haven’t evolved to understand the world at that scale….Instead, we’re trapped on this very thin slice of perception right in the middle. But it gets strange, because even at that slice of reality that we call home, we’re not seeing most of the action that’s going on…our brains are sampling just a little bit of the world.”

Eagleman’s presentation shows us that our brain is much more adaptable than we have imagined. It can actually sort through all manner of sensory information and make meaningful patterns. For example, electrical impulses received by the body’s skin, can become a source of information that the brain decodes and uses meaningfully. 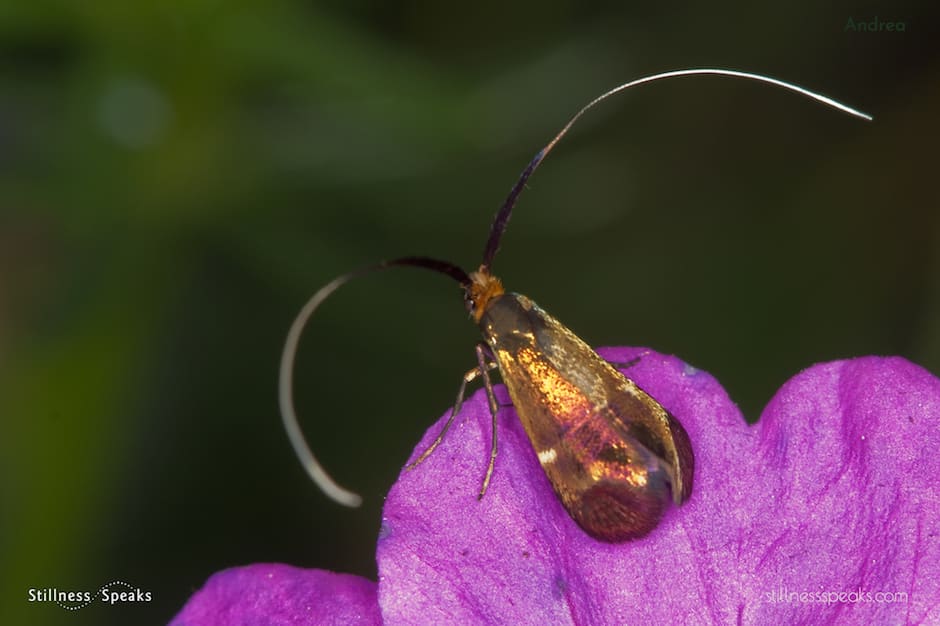 “…across the animal kingdom, different animals pick up on different parts of reality. So in the blind and deaf world of the tick, the important signals are temperature and butyric acid; in the world of the black ghost knifefish, its sensory world is lavishly colored by electrical fields; and for the echolocating bat, its reality is constructed out of air compression waves.”

The variety of sense perceptions used in nature determine our reality… but they present just a slice of the totality….which makes up our surrounding world…

“That’s the slice of their ecosystem that they can pick up on, and we have a word for this in science. It’s called the umwelt, which is the German word for the surrounding world. Now, presumably, every animal assumes that its umwelt is the entire objective reality out there, because why would you ever stop to imagine that there’s something beyond what we can sense. Instead, what we all do is we accept reality as it’s presented to us.”

“The brain figures out what to do with the data that comes in. And when you look across the animal kingdom, you find lots of peripheral devices. So snakes have heat pits with which to detect infrared, and the ghost knifefish has electroreceptors, and the star-nosed mole has this appendage with 22 fingers on it with which it feels around and constructs a 3D model of the world, and many birds have magnetite so they can orient to the magnetic field of the planet. So what this means is that nature doesn’t have to continually redesign the brain. Instead, with the principles of brain operation established, all nature has to worry about is designing new peripherals.”

Holding a small tablet in his hand, Eagleman describes in detail his impressively promising sensory substitution research with the deaf…

Eagleman demonstrates the vest and its technology but then moves beyond mere substitution and describes sensory addition….

“… we’ve been very encouraged by our results with sensory substitution, but what we’ve been thinking a lot about is sensory addition. How could we use a technology like this to add a completely new kind of sense, to expand the human umvelt? For example, could we feed real-time data from the Internet directly into somebody’s brain, and can they develop a direct perceptual experience?”

Eagleman suggests that perhaps we are not limited to mother nature’s sensory advances or to the five senses that we ordinarily use.  What does this offer to consciousness and perception?  Eastern and western mythologies have personified the five human senses for millennia to help us make fundamental meaning out of our perceptions. 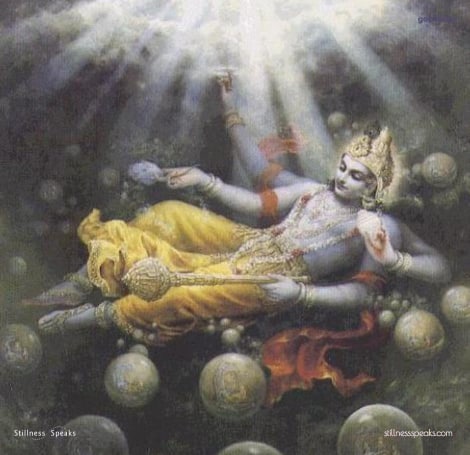 “The notion of this universe, its heavens, hells, and everything within it, as a great dream dreamed by a single being in which all the dream characters are dreaming too, has in India enchanted and shaped the entire civilization …. the ultimate dreamer is Vishnu floating on the cosmic Milky Ocean, couched upon the coils of the abyssal serpent Ananta, the meaning of whose name is Unending. In the foreground stand the five Pandava brothers, heroes of the epic Mahabharata, with Draupadi, their wife: allegorically , she is the mind and they are the five senses. They are those whom the dream is dreaming.” ~ Joseph Campbell

Per ancient wisdom human existence is based on the 5 senses … and more importantly the same wisdom says that sense based reality is fundamentally illusory … and now with Eagleman’s claim we can extend beyond these five? … so do the additional senses change the fundamental illusion? … What does the potential for new senses, created via technological wizardry, mean for being human? … Eagleman’s postulation could have major implications on our “practical” existence … but it also opens up some fundamental questions in the science and consciousness arena.

See our Stillness Speaks Teacher’s Page about David Eagleman for bio information as well as books, videos and articles by this pioneering neuroscientist.

Joseph Campbell quote is from his book, The Mythic Image