The teachings of Kashmir Shaivism are derived from the ninety-two Tantras, also known as Agamas, revealed by Lord Shiva in the form of a dialog between himself and the Divine Mother.

After reading the summary … please continue scrolling down until you see “Explore More About Kashmir Shaivism” and then you can access Posts & Videos, Articles (PDFs), Books&DVDs, & Related Teachers … for this tradition.

Of these Tantras, sixty-four are considered purely monistic, eighteen are monistic-cum-dualistic, and ten are dualistic. Kashmir Shaivism derives its teachings from the sixty-four monistic Tantras, known as the Bhairava Tantras, the essence of which is called ‘Trika Shaivism’.

The word trika means “the threefold science of man and his world.” In the idea of trika, there are three energies: parā (supreme), parāparā (medium) and aparā (lowest).

These three primary energies represent the threefold activities of the world. In the thought of Trika, therefore, it is admitted that this whole universe and every action in it, whether spiritual, physical, or worldly, is existing in these three energies.

“Trika philosophy is meant for any human being, without restriction of cast, creed or color.” ~ Swami Lakshmanjoo

Due to the rise and fall of Kashmir over the past eight centuries, the knowledge of Kashmir Shaivism has remained practically hidden from view. As an oral tradition, its teachings have always been passed down by word of mouth, from master to disciple. Today, scholars find it difficult to piece together the intricate web of Kashmir Shaiva philosophy, since many of its earlier manuscripts are now extinct. 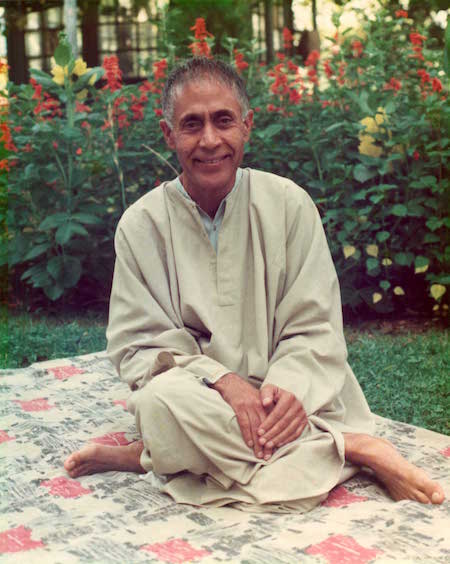 Fortunately, Swami Lakshmanjoo was a direct descendant in the unbroken chain of this oral tradition. With the gradual emergence of Kashmir Shaivism, over the last few decades, hardly any publication has appeared without mention of his name. Seeking guidance for all of his publications on Kashmir Shaivism, Jaideva Singh looked upon Swami Lakshmanjoo as, “the doyen of Shaiva Agama.”

In 1972 Swami Lakshmanjoo gave a series of lectures, which he considered to be ‘the essence of Trika Philosophy’. Without the aid of texts, Swamiji revealed the most important aspects of Kashmir Shaiva Philosophy, at the same time revealing some of the unknown secrets of his oral tradition. His memory was so vast that he could effortlessly verify his statements with quotes from the various Shaiva tantras.

Fifteen of the topics selected covered the essence of the first fifteen chapters of Abhinavagupta’s Tantraloka. These lectures were recorded by John Hughes and form the substance of Swami Lakshmanjoo’s book, Kashmir Shaivism, the Secret Supreme.

For the last twenty years of his life, Swami Lakshmanjoo translated into English what he considered the most important teachings of Kashmir Shaivism. These translations were recorded by John Hughes and form the basis of the teachings presented by the Universal Shiva Fellowship and Lakshmanjoo Academy.

Unless noted otherwise, all content related with Kashmir Shaivism on our website has been graciously and generously provided by John Hughes and his team at Lakshmanjoo Academy.

Image: Gurunatha, Abhinavagupta and the lineage of Kashmir Shaiva Masters by Claudia Dose, generously provided to Stillness Speaks. For more of her art, please visit her website.