Batchelor & Shukman on Zen: Arriving at The Single Source

“Zen does have a huge amount to offer us here and now, as we are, precisely because it’s so focused on this moment and simply surrendering to it, studying it, coming at it in a number of ways, to have a more intimate relationship with life …” ~ Henry Shukman

On June 4, 2014, Stephen Batchelor and Henry Shukman, two illuminators of wisdom especially regarding Zen & Buddhism, came together for a fascinating conversation at  Mountain Cloud Zen Center in Santa Fe, New Mexico on Zen that was titled: “Going Back to the Source.”

Henry is already part of our teachers library and Stephen will be added in the future – he is a contemporary Buddhist teacher and writer, best known for his secular or agnostic approach to Buddhism. Stephen considers Buddhism to be a constantly evolving culture of awakening rather than a religious system based on immutable dogmas and beliefs. Click here for his Full BIO.

Their wide ranging dialogue  begins with “The Great Doubt” or the great question “Who am I?” and what it means to be human … and then they move on to converse about the dismantling of knowing, Buddha’s recounting of his awakening and clarification/elaboration of the term “nirvana,” zen and classical philosophy, dharma, seeing with clarity, the connection between ancient greeks and buddhism, Eastern and Western thought-humanist enlightenment in the west, roots of being human, Zen’s transitional phase, like mindedness, identification with everything that lives, and releasing our reactivity.

In their view, we arrive at the single source from many paths.

Below are some highlights – direct quotes taken from the video transcript.

The Opening Dialogue – Who Am I? 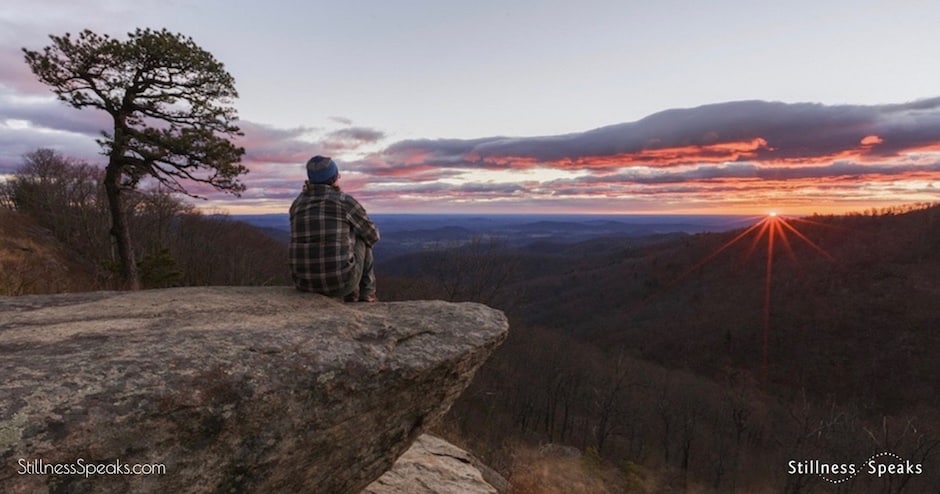 Stephen Batchelor: Where should we start? Well the topic is “Going Back to the Source,” and I guess you know that I’ve trained as a Buddhist monk in different traditions, including the Zen tradition in Korea. And one of the reasons that I trained in Zen is because I wanted to really connect with the, you know, the source of my own questioning—you know, what it means to be human. And Buddhism as a historical, religious tradition is basically an extended answer to that question. But I think very often when you tease out the answer you sometimes lose the question and you become more interested in perpetuating a set of answers than actually reconnecting with the core of your own life, which is the fundamental koan, the fundamental question.

Henry Shukman: That’s exactly how we do it in Zen, as you know. One of the three essentials of Zen that were formulated by Hakuin in the 1000s is precisely what he called “The Great Doubt.” And he said, you know, “Where there’s great doubt, there’s great awakening.” You can’t miss it. And “The Great Doubt” means the great question; it means fundamentally sort of settling down within, looking within and asking “Who am I?” and “What is this?” What is this experience that I’m—that I am apparently having? And how is the “I” who’s having it? So that, I mean, I can totally relate to your view of Zen in that regard—that it’s much more about the question than about any answer. And one of the things we see again and again in Zen law, Zen history, and of course in the koan is a master offering a putative kind of an answer only to take it away again. And a classic case is Basho or Mazu who used to teach “Your very mind, that’s Buddha.” And he said, he was asked once, “Why do you teach that way?” And he said, “Well, it’s just something I say to stop babies from crying.”

Henry Shukman: And then he was asked, “Well, what do you say when they’ve stopped crying?” And then I say, “No mind. No Buddha.”
….

Henry Shukman: … the word “awakening” … … there is a kind of shift that can happen in our consciousness. And what we might call, say, a moment of awakening, you know, a sudden glimpse of another, well, not really of anything; really not of anything.

{Master Kyogen} simply says in his verse commemorating the moment, he says, “I’ve forgotten everything I ever knew. I now don’t know anything,” basically. And I think he really means everything, you know, the whole world and all my views of it are gone. And even the “me” that I thought I knew is gone. So the—what would we call it?—the insight, the revelation, the epiphany is not into a new known.

It’s more a dismantling of knowing.

Stephen Batchelor: … … in the Pali text where the Buddha recounts his awakening; … he says that it’s very difficult for people who love, delight and revel in their place to see this ground, the ground of conditioned arising, contingency, life and to see this ground, nirvana, which is the falling away of reactivity.

So … he does not describe his awakening in terms of coming to know something. The word “to know” … doesn’t occur in this passage.

The awakening is described, on the one hand, as a coming to see something and on other hand—and I think this is probably the main point—as a radical shift in perspective. In other words, a shift in perspective from where one is preoccupied with what we call “your place”—and by that …

… it means everything we identify with, you know, your nation, your social position, your belief system, your political views—as long as you’re preoccupied with that stuff, you cannot see your ground.

So the Buddha’s awakening was not a sudden revelation, a privileged knowing about the nature of reality. He doesn’t mention that at all.

He talks about letting go of a certain kind of preoccupation with “me” and “my stuff” and “my position” in order to see the ground—one’s own ground, the ground, as it were, of life, of being itself.

And that ground is twofold. On the one hand, it’s the process of contingency and life itself, which of course is not actually much like a ground at all. If anything, it’s a groundless ground. It’s, again, this idea of something total drops away. Your sense of position and certainty, it falls away.

And what you fall into is not some other permanent state, like, you know, God or something; but contingency itself, which is bottomless, which is fluid, which is constantly unfolding and that ground is seen from the perspective of this very difficult term, …

… nirvana, which here simply means the stopping of reactivity, the stopping of grasping and hating and fearing. And that, to me, is very close, in fact, to what you just said about your Zen master.

So, to me, the traditions meet in these kind of fundamental experiences. And the history of Buddhism, in a sense, the history of consolidating those views till they become so sort of rigid and fixed that they cease to serve their function any longer and that brings up a countermovement.

And the origins of Chan, Zen in China, are basically a return to the source. They’re a dropping of the Buddhist metaphysics, of all of the power structures of these great monasteries, and they’re returning to exactly what the Buddha did all those years ago: just sit down and come to terms with who you are, what is going on and that’s, I think, both the alpha and the omega, to use Christian terminology, of the whole practice.

Philosophy and the Essence of Zen

Henry Shukman: We don’t really have very elaborate practices in Zen. You know, there’s no visualization, there’s no mantras, there’s no gradual practice, actually. We don’t build it up step-by-step. We actually—we sort of go cold turkey: we’re thrown on the cushion and “be still” and, you know, “see what happens.”

There’s nothing more to be found than just this.

And, yet, can we actually sort of receive this or have we got so many opinions about it? I mean the third Chinese ancestor, Sosan, you know, he said, “All you do in this practice is discard opinions.”

You know, discard opinions pro and con, basically. That’s all you do. That’s all there is to be done. And so this, actually, what you were just saying about—I forget your word, but sort of cessation of reactivity, dropping reactivity.

Stephen Batchelor: Yeah, the fading away, the dropping of reactivity.

Henry Shukman: Right, right. Well, this is exactly what Sosan is talking about in the “Shin Jin Mei,” his famous poem on having faith in mind.

There’s just mind itself. Experience of consciousness itself is it.

Now I don’t know whether I’m—what, this is exactly the moment to, but I want to just point out something that struck me as quite remarkable as somebody who comes from a rather classical educational background. I grew up studying Latin from the age of nine and Greek from the age of eleven and started a PhD on Homer, which I never finished, but Plato actually talked about the destroying of hypotheses. Just getting rid or, you know, doing away with hypotheses—theories or hypotheses or what we might call “views of how things are, which is rather interesting, that there, too, in Greek philosophy, which was much more practical in a sense than modern philosophy, you know.

Even there, which somehow I was certainly schooled to think of as rationalist while something like Zen was very much not rationalist, it was kind of crazy, mystical stuff, you know, as opposed to the cornerstone of Western rationalism, you know. But, actually, remarkably—

Stephen Batchelor: … the Buddha is asked …: “What is complete vision?” or “right view,” …

…When you experience life as it is unfolding with … complete intelligence, … you find that life—that the coming and going of experience and things—is not reducible to either “it is” or “it is not.”

… language is incapable of capturing the fluid process of what we call life itself.

Stephen Batchelor: … when Pyrrho returned to Greece he established the school of skepticism and one of the few fragments that survives from his school is the statement where he says that,

{Pyrrho} … says by allowing the mind to come to rest in that radical uncertainty—that radical unknowing leads to what he calls aphatos which means speechlessness.

… But the important point for me is that Pyrrho, the founder of the school we now call skepticism, is very likely in my opinion to have had his core awakening through his encounter with Indian tradition whether or not he went Buddhist as such, we don’t know.

Credits:
Going Back to the Source : A conversation with Stephen Batchelor and Henry Shukman, Produced by Chris Hebard, Filmed by Luke Fitch (altitude-fx.com), copyright Stillness Speaks.

This conversation, and the video, is presented by Stillness Speaks in association with Tricycle and Mountain Cloud Zen Center.

Full transcript of the conversation is made available courtesy of Tricycle and can be found, at Tricycle, by clicking here.