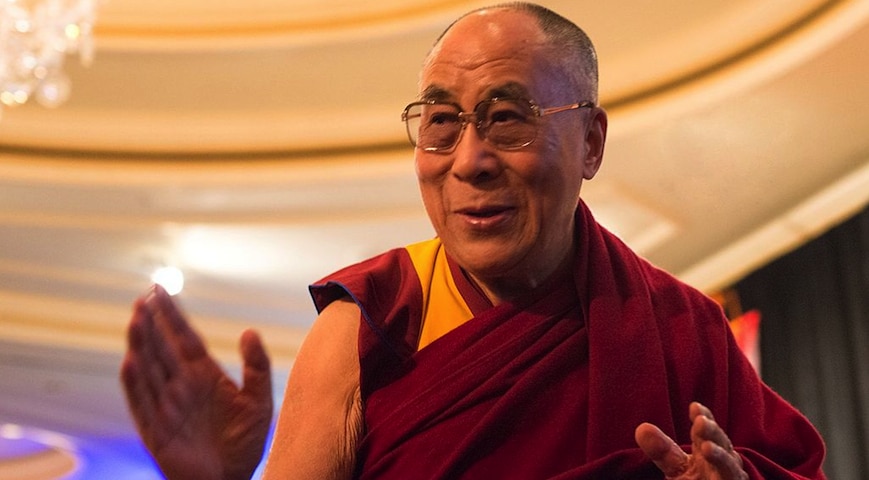 His Holiness the 14th Dalai Lama, Tenzin Gyatso: The spiritual leader of The Tibetan people, recognized at the age of two – as the living reincarnation of his predecessor, The 13th Dalai Lama, and the worldly manifestation of the one and only Bodhisattva of Compassion, Chenrezig – through a ritual handed down over the centuries called “The Black Hat” reincarnation system.

Gyatso means “ocean” and has been part of the title of the Dalai Lamas since the second. Historians attribute the name Gyatso to Genghis Khan, normally thought more as the brute of the Mongol invasions than as a spiritual icon. Remarkable being named after The Bodhisattva of Compassion and Genghis Kahn before the age of two, before he could even speak!

The Dalai Lama is considered the symbolic embodiment of the Tibetan national character and, for this reason, tempers his behavior with compassion and peace, honoring that tradition. Overseeing a government in exile, The Central Tibetan Administration, the Dalai Lama is more a public administrator than a spiritual icon, although many in the Western pop culture mistakenly associate him with Self Realization.

Here are some quotes from the Dalai Lama, which focus more on doings resulting from Dharma, than pointers to Self Realization:

Our prime purpose in this life is to help others. And if you can’t help them, at least don’t hurt them.

Love and compassion are necessities, not luxuries. Without them, humanity cannot survive. “

Here are some additional resources for those interested in delving deeper :

Post & Featured Images: His Holiness the Dalai Lama, by Minette, CC BY 2.0.

Dalai Lama: My Number One Commitment